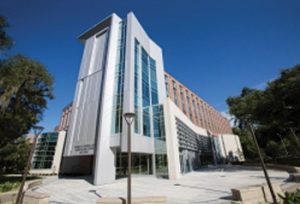 The University of Florida College of Medicine remained one of the nation’s top-rated public medical schools in U.S. News & World Report’s annual rankings of the best graduate schools.

The College of Medicine is ranked No. 41 among the 150 medical schools nationwide and No. 17 among public medical schools. UF continues to be the highest-ranked medical school in Florida. It also ranked 65th for primary care, a separate category that considered the percentage of graduates doing primary care residences in family medicine, pediatrics and internal medicine between 2015 and 2017.

“These rankings are a reflection of our ongoing commitment to exceptional health professions education and research,” said David S. Guzick, M.D., Ph.D., senior vice president for health affairs at UF and president of UF Health. “We have consistently shown that UF Health has earned its place among the nation’s best research-intensive schools. Our faculty and staff can once again be proud of their accomplishments.

The College of Nursing’s Doctor of Nursing Practice program is at No. 28 in the country. It is also ranked No. 1 among such programs in Florida.

“We are extremely proud to have the Doctor of Nursing Practice program ranked No. 28 in the U.S. News & World Report Best Graduate Schools rankings. Last summer, our D.N.P. program was re-accredited for 10 years. As the top program in the state — one that is in the top 20 among public universities — we offer doctoral programs online to students who have a bachelor’s degree or master’s degree in nursing. We pride ourselves on educating the best and brightest advanced practice Gator nurses, who translate theory and research to innovative and evidence-based clinical settings as we continually strive to improve patient outcomes,” said Anna McDaniel, Ph.D., dean of the College of Nursing.

Factors that affected the medical school’s overall research ranking included its acceptance rate, faculty-to-student ratio, federal research grants and multiple surveys of academic administrators. The College of Medicine showed gains in students’ median undergraduate grade-point average and total admission-test scores between 2016 and 2017, according to figures from U.S. News & World Report. The acceptance rate went from 5 percent in 2016 to 4.6 percent in 2017.

“The University of Florida continues to attract outstanding medical students and distinguished, ambitious researchers from around the nation. That is reflected in the College of Medicine’s consistently solid standing among the nation’s top medical schools,” said Michael L. Good, M.D., dean of the UF College of Medicine.

0 0 0
Previous : Manufacturers with Gainesville Roots
Next : Spark Wonder on May 19!