The King Commission notable highlight this year is the 31th Anniversary of the Edna M. Hart Keeper of the Dream Scholarship Award. The award recognizes the academic achievements, civic involvement, and leadership of high school seniors. The Commission, since 1989, has given nearly $200,000.00 to forty high school seniors in Gainesville/Alachua County. 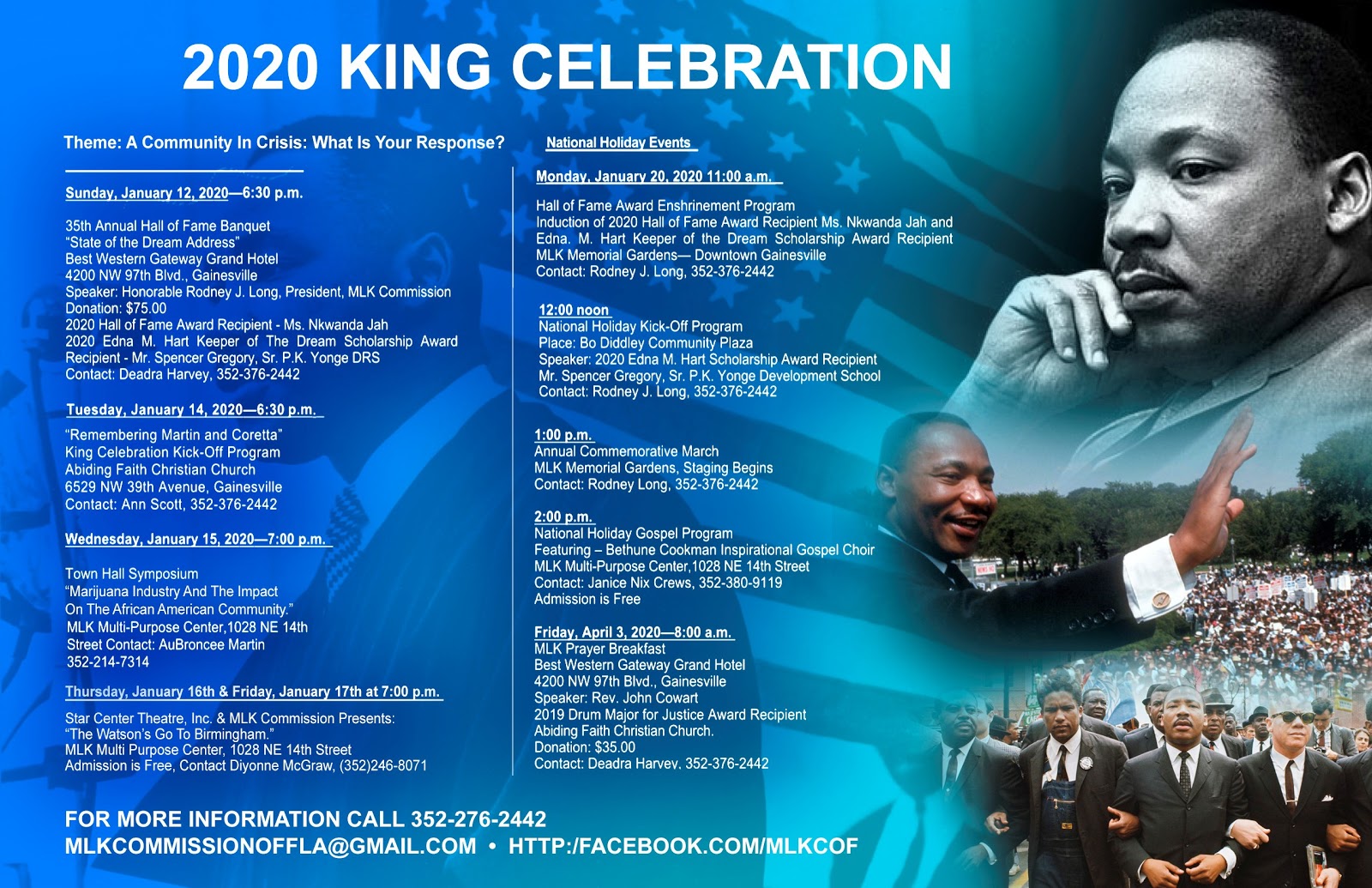 King Celebration ’20 begins on Sunday, January 12 with the 35th Annual Martin Luther King, Jr. Hall of Fame Banquet to be held at the Best Western Gateway Grand Hotel, reception, 5:30 pm, dinner at 6:30 pm. It will feature the “State of the Dream Address” by the Honorable Rodney J. Long, Founder & President, of the Martin Luther King, Jr., Commission of Florida, Inc. This year’s theme is: “A Community In Crisis: What’s Your Response?”. Donations are $75.00 each with no tickets sold at the door. The 31st Annual Edna M. Hart Keeper of the Dream Scholarship Award will be presented to Mr. Spencer Gregory, Senior, P.K. Yonge Research School. The scholarship Award is sponsored by Publix Super Market Charities, Inc., and UF Health.

Tuesday, January 14th is the Remembering Martin and Coretta Program to be held at Abiding Faith Christian Church, 6529 NE 39th Avenue, Gainesville, Florida. This year’s event will feature special tributes by the Alpha Kappa Alpha Sorority, Inc and the Alpha Phi Alpha Fraternity, Inc. The Event is sponsored by C. Ann Scott and the MLK Commission. Admission is free.

The Highlight of King Celebration is the Town Hall Symposium titled, “The Impact of the Marijuana Industry On the African American Community.” The Town Hall forum will be held on Wednesday, January 15 at 6:30 pm at the MLK Multi-Purpose Center located at 1028 NE 14th street. The event is sponsored by Infinite Energy, Josiah T. Walls Bar Association and the MLK Commission. Admission is Free.

The National Holiday Activities on January 20th will begin at 11:00 am at the MLK Memorial Gardens in Downtown Gainesville with the Hall of Fame Enshrinement Program for our 2020 Hall of Fame Award Recipient N’Kwanda Jah, Community Activist (see attached Bio) and the 2020 Edna M. Hart Keeper of the Dream Scholarship Award Recipient Mr. Spencer Gregory, Senior, P.K. Yonge DRS. The event is sponsored by the MLK Commission. The event is free and open to the public.

The Annual Commemorative March sponsored by Cox Communications, Coca Cola Beverages Florida and the MLK Commission will begin at 1:00 pm at the MLK Memorial Gardens to the Martin Luther King, Jr., Multipurpose Center on Waldo Road.

The National Holiday Gospel Program sponsored by UF Health will feature The Bethune Cookman Inspirational Gospel Choir and local talent will conclude the King Celebration Activities on Monday, January 20 at 2:00 pm at the MLK Multipurpose Center. Admission is free.

The MLK Commission of Florida, Inc., sponsors and or co-sponsors workshops on culture diversity, education and town hall symposiums on issues of the day. The Commission was instrumental in the successful implementation of the Charter Officer for Equal Opportunity for the City of Gainesville. The Commission collaborated with the University of Florida Office of the President with a Helping Our Neighbors Holiday Programs that provided food baskets to needy families in our smaller cities and is an annual co-sponsor of the Strike Out Hunger Week including a communitywide food drive to help our food banks and pantries and a Thanksgiving Basket Giveaway program with the Long Foundation, Inc.