In his opening comments to guests, GNV’s CEO, Allan Penksa informed guests with financial detail on the almost $16 million project and informed them of additional phases of expansion that are part of the airport’s master plan.

“This project is paid for by a combination of state and federal grants, along with passenger facility charges, or PFCs collected by our airlines,” Mr. Penksa said. “Most importantly, there is no local tax involved. It is the second of four phases of terminal investment, and it won’t be very long before we get going on these final phases, adding two new passenger boarding bridges to connect to this expansion, a new outbound, baggage screening/ handling system and additional airline operations space to better accommodate existing and future carriers.” 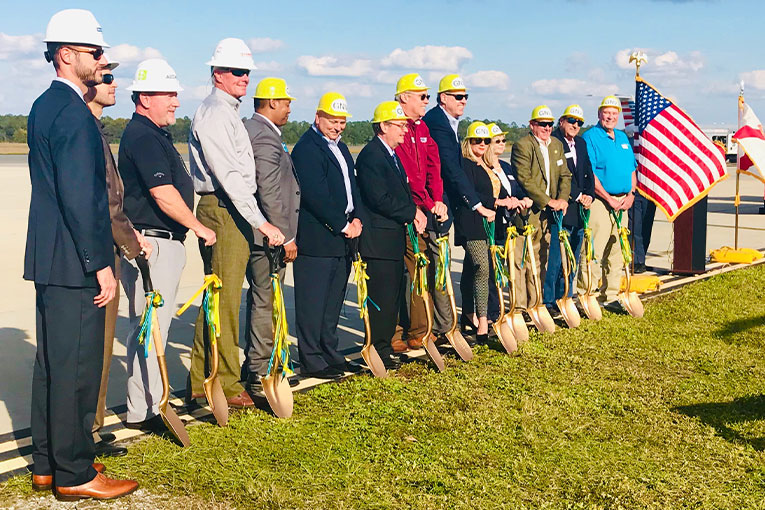 Gainesville Alachua County Regional Airport Authority (GACRAA) Chairwoman Grace Horvath said the community is truly responding to the airport’s enhanced service and GNV’s “Fly Easy” experience. “We are resonating with more and more people, who are discovering how uncomplicated and stress-free, and yes, how economical flying from GNV can be.”

The expansion is the latest in several milestones reached by the busy North Central Florida airport. In the last year alone, GNV added nonstop service to Dallas-Fort Worth, a second screening lane and TSA Pre✓, along with increased parking capacity. Through the airport’s two airlines, Delta and American Airlines, and four international hubs of Atlanta, Charlotte, Dallas-Fort Worth and Miami, GNV passengers can access 343 destinations across the globe in just one stop. In addition, the airlines are upgauging, or adding capacity, to existing flights by utilizing larger aircraft. American Airlines will start using 63-seat regional jets on some flights to and from its DFW hub Dec. 18, in time for the holidays. In addition to increased seating capacity, the CRJ-700 aircraft features First Class and Main Cabin Extra (six inches more legroom and earlier access to overhead bin space) along with Main Cabin seating. GNV has seen a steady increase in traffic this year, so having more capacity on its flights, along with the terminal expansion, is welcome news. By the end of October, year-to-date traffic at GNV was very close to surpassing its all-time record of 476,396 passengers in 2018. Mr. Penksa says the airport has recently maintained load factors of around 87 percent. The terminal expansion is expected to take 21 to 23 months to complete. Interruptions to flight operations and passenger experience are expected to be minimal, with the majority of construction improvements in the existing terminal taking place outside business hours.