While the University of Florida helped put the quaint city of Gainesville on the map back in 1853, modern additions to the city have caught the attention of diverse waves of people beyond students, both prospective residents and tourists alike. With Depot Park, Bo Diddley Plaza, the Helyx Bridge and various other staple attractions, Gainesville has become more and more of a destination over recent years. While the majority of Gainesville residents are familiar with these sites, most are unaware of the source for the brain power and expertise behind their conception and execution. The organization behind these projects and many others in the works, is known as the Gainesville Community Redevelopment Agency, or CRA.

The CRA is an organization focused on eradicating blight in Gainesville through redevelopment strategies in the following four areas of town: Downtown, Eastside, Fifth Avenue/Pleasant Street and College Park/University Heights. Major projects in the works right now include More in Midtown, Destination South Main, the Power District Development Plan and the redevelopment of Cornerstone. To finance said projects, the CRA obtains funds from tax increment funding, which is derived from the county’s property tax revenue. 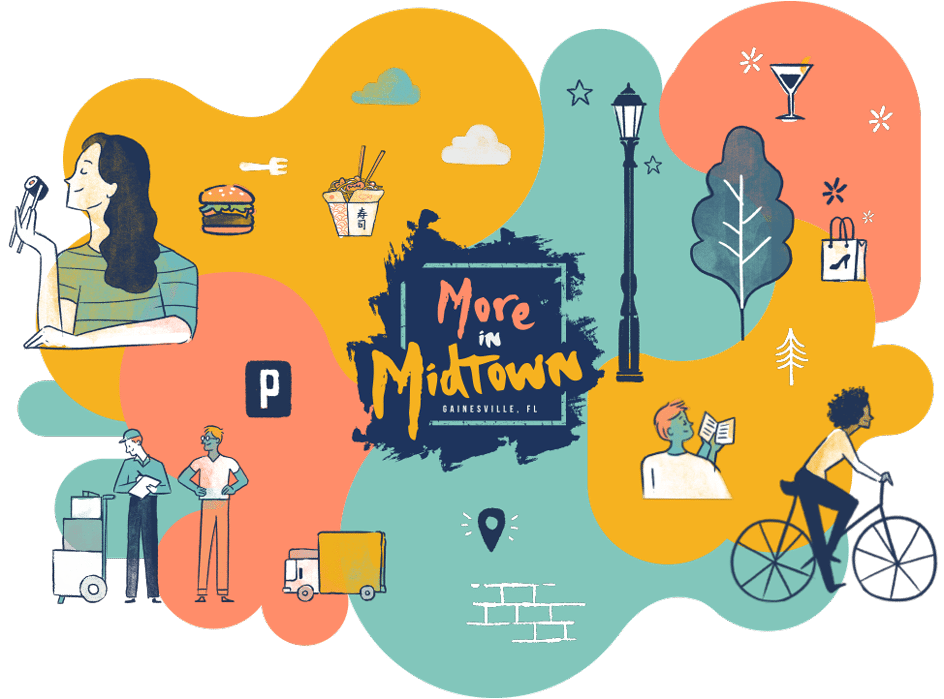 Plans for More in Midtown began after the CRA noticed the potential to transform First Avenue and its condition of neglect into a location of which Gainesville residents could be proud. After working closely with stakeholders and community members, the CRA determined that the prominent needs were for additional sidewalk space, trees, streetlights and parking. To do this, utilities had to be buried underground, dumpsters had to be relocated and 2,000 linear feet of space was freed for walk space. Construction began in January of 2017 and is expected to end in February of 2018, but the CRA began discussing the project back in 2012.

“The prime location of First Avenue and its mix of uses and users was the reason why this street was selected,” said Sarit Sela, the project manager. “Midtown is a prominent area in town, as it connects residential areas with the University of Florida. We have an entire range of life going on here throughout the day, evening and weekends, and it is a place to connect, so we definitely want it to be more appealing and feel safer.”

In addition to 60 new parking spaces for cars, 110 scooter spaces and 40 bike racks, Midtown will see pops of color through the incorporation of locally commissioned murals on building facades, dumpster enclosures and electric cabinets. Altogether, the construction cost is close to $4 million, and the funds come from the CRA, Gainesville Regional Utilities and the University of Florida Foundation.

“We already see more people enjoying the space,” Sela said. “I’m sure that with time we will see more and more activity here. It will become more of a destination or place to go to than a place to go through.”

Another project that the CRA is excited about is Destination South Main, a 12-month construction project begun in 2017. Phase 1 of the project spans the ¾ mile stretch of the South Main corridor from Depot Avenue to South 16th Avenue.  Construction is expected to be complete in December 2018, with the roadway and area businesses remaining open during all construction phases.

The original function of South Main Street was to bring people through it – a sort of gateway into the community. However, the street is also the front door to several important businesses and destinations, including the soon-to-open Cade Museum and Depot Park, and it is in dire need for improvements to support pedestrian traffic.

“The design that the community came up with and the CRA is facilitating finds that balance between 18 wheelers and baby strollers,” said Andrew Meeker, the project manager. “We have those two unique user groups and all a lot of different user groups in between, so we are taking a sensitive and thoughtful approach to street design.”

One major change includes burying overhead utility infrastructure to both improve reliability during natural disasters and also open up the land to increase development potential. The total cost of improving the ¾ of a mile by 100-feet wide street: $8.5 million, which will be funded directly from the CRA. Construction is also expected to create 70 direct jobs and support 73 indirect jobs, and nearly 100% of the prime contractors utilized are local.

“South Main Street will really serve as the backbone to a lot of economic opportunity that exists down there,” Meeker said. “We really want the public to know it is an inviting and welcoming destination for them to walk along.”

Other highlights of the South Main Street project include:

A third project in the works for the CRA is the redevelopment of the Power District, a plan with a longstanding history in the community. The CRA will be assisting Gainesville Regional Utilities, to transform the 17-acres of land into a multi-use space supportive of vertical development and with amenities like a food hall.

A major component to this project is daylighting, or redirecting, the Sweetwater Branch Creek, which currently runs north of the duck pond, crosses University Avenue and flows into a concrete box in the Power District. The water leaves said box in Depot Park to ultimately be treated and pumped back into the watershed. The CRA hopes to improve the water quality so that the creek can become a public amenity and consequently unlock over $100 million in private development potential.

“We don’t have a lot of waterfront real estate here in Gainesville,” Meeker said. “If we do it well, and we do it right, we can create a pretty dynamic environment in which there are cafes, restaurants and shopping all along the promenade with the creek insight.”

The redevelopment of Cornerstone, a 30,000-square foot business incubator in East Gainesville, is another project the CRA is involved with alongside Santa Fe College and the City of Gainesville. The CRA is currently installing the necessary infrastructure to allow private, vertical development.

“One of the reasons we [CRA] exist is to facilitate private investment in some of these underserved and overlooked communities, and there’s a lot of value in them,” Meeker said. “This project will bring a new company in East Gainesville, stimulate the economy, create jobs, and hopefully there will be a domino effect in which those employees will start looking for homes, restaurants and grocery stores. Our ultimate hope is that things radiate outside of the economic nodes we focus on.”

With several other projects in the works in addition to these four, Gainesville is heading toward a major transformation, which the CRA and community members are thrilled about.

“Gainesville’s future is bright – it’s exciting,” Meeker said. “Each one of our projects, though geographically separated, is interconnected. They are all housed in this one office, and seeing the connections and the synergies start to emerge is what’s most exciting for us as an organization.”