Local Club Kids from the Boys and Girls Club of Alachua County, community leaders, elected officials and the media joined Club and Cox leadership in unveiling a new Innovation Lab at the Club on NW 51st Street in Gainesville.  Through a partnership with the Boys and Girls Clubs of America, Cox provided a grant to the Club for state-of-the-art equipment, including 10 new desktop computers, six laptop computers, educational projector and 92-inch drop screen, virtual reality, AV system and network. This new equipment will allow the kids the ability to do their homework and even share their screen with their teachers if they have questions about an assignment.  A single iPad controls the entire room with the touch of a button. The Club Kids were excited to share with reporters how they will be able to keep up in the classroom thanks to the new equipment. 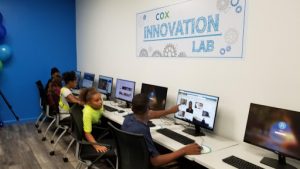 While at the event, Kevin Hart, executive vice president and Chief Technology Officer for Cox, and Aimee Pfannenstiel, vice president for the Cox Central Florida Market, announced changes to Connect2Compete, a program designed to connect low income families with K-12 students to the internet.

Also announced today, through a trial in Gainesville, is the removal of the eligibility restriction of unpaid balances on previous accounts to qualify for its low-income broadband offering, Connect2Compete. This change will allow customers who have a previous account with an unpaid balance greater than six months old to be eligible for the low-cost internet service.

“We heard from community leaders that removing restrictions to the program such as previous unpaid balances would help more people take advantage of the service,” said Aimee Pfannenstiel, market vice president of Cox. “We are very happy to offer the speed increase and look forward to more families signing up for Connect2compete.”

At $9.95 per month, Cox offers the highest speeds at the lowest cost per megabyte in Gainesville for families enrolled in low-income programs. Cox also installs the service and provides a Wi-fi modem at no additional charge and doesn’t require a deposit regardless of credit score.

In 2017, Cox expanded the program with free online tools with the Cox Digital Academy.  Access is an important first step and digital literacy helps children and families have more resources to be safer online and to make the most of their connection.

Cox has offered a low-income internet program for two decades and has a strong history of exceeding its goals for providing access to technology to students and their families – in the classroom, in the community and in homes. Through public-private partnerships and a dedicated focus across the entire Cox organization, the company continues to lead the way in closing the digital divide in the communities it serves. By connecting schools, community centers like Boys & Girls Clubs, and homes, Cox is helping create stronger neighborhoods, schools and cities.

0 0 0
Previous : Colliers International in Gainesville Facilitates Sale and Lease of 9,101-Square-Foot Building in Grove Street Submarket
Next : Meridian Board Announces Next President and CEO