The City of Gainesville just rolled out a new mode of transportation fit for a future-forward community.

Gainesville is among the first in the nation to launch an autonomous transit shuttle. With innovation and cutting-edge transportation in mind, the electricity-run autonomous bus establishes the city as a leader in smarter options to get around the city. The futuristic feat is possible due to a $2.5 million grant from the FDOT.

On Feb. 3, members from the City of Gainesville, the University of Florida and the Florida Department of Transportation, who consist of the joint effort to launch the autobus program, gathered together to celebrate the inaugural AV shuttle ride. The event took place at 100 SW First Ave. 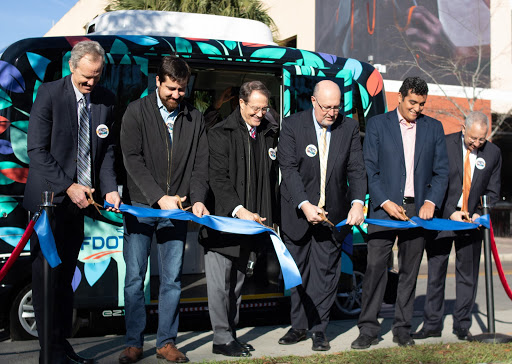 The autobus is part of small city efforts to bridge together the Gainesville Innovation District, the downtown area and the University of Florida campus in a seamless, connected route. The 12-passenger shuttle, which is still in its pilot phases, can be seen cruising between the parking garage on Southwest Second Street and UF Innovate | The Hub during the hours of 8 a.m. to noon and then from 3 p.m. to 7 p.m.

Both modern and convenient, the shuttle will surely simplify transportation between major hot spots such as offices, entertainment and restaurants, especially for professionals working in Gainesville’s Innovation District. Whether someone is heading out of the office to grab a quick lunch or craving a fresh cup of coffee downtown, it will be easier than ever to jump on a shuttle and quickly arrive at a destination.

Lauren Poe, mayor of the City of Gainesville, shared his thoughts on how the shuttle will benefit the community in modern ways.

“We will now be able to move people safely, quickly and comfortably between our downtown and the University of Florida, cutting right through the Innovation District,” said Poe. “This shuttle will create new economic opportunities, increase creative collisions between our neighbors, and serve as a model for how we can re-think first-mile and last-mile solutions for our entire city.”

Although fresh to the Gainesville scene, the autobus has been catching the eye of local residents and business owners. Among them is John Fleming, managing partner of local developer Trimark Properties, which owns and manages several commercial office buildings in the region. For Fleming, the shuttle represents a modern foot forward for the entire community.

“I am extremely excited to have this cutting edge connectivity,” Fleming said. “This vital and innovative solution to ‘the last mile’ continues to move Trimark’s vision of a vibrant and fully linked urban core forward.”

Now, the gaps around the city are more connected than ever, without having to find a new parking space. Autobus riders will find themselves able to enjoy more efficient links to the places they want to be in Gainesville. Currently, the shuttle is free of charge.

Word first traveled about the shuttle in August 2017 with a potential release date of August 2018. To ensure the safety and success of the project, the shuttle underwent extensive testing and is in the process of securing further official permissions from the city and FDOT. Because the shuttle is still in its testing phases, an operator will be present on board to ensure rides run smoothly.

The test shuttle is expected to run until June 17, 2020, according to the City of Gainesville.