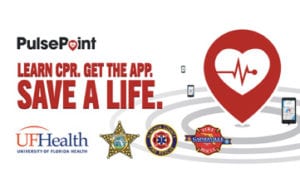 University of Florida Health officials and Alachua County and city of Gainesville emergency first responders announced the launch of a smartphone app that alerts citizens to a nearby cardiac emergency and empowers them to help, which officials say could double the survival rate from cardiac arrest in Gainesville and the surrounding area.

PulsePoint Respond is now available throughout Alachua County, thanks to funding from the Jerome H. Modell, M.D., Professorship of Anesthesiology in the UF College of Medicine’s department of anesthesiology.

More than 3,300 communities in 42 states have implemented the CPR mobile alert program,  which was released in 2010 by Bay Area nonprofit PulsePoint Foundation. The free mobile app alerts potential responders —citizens and off-duty medical professionals — who are within a quarter-mile of the person experiencing a cardiac arrest. The app, which does not alert participants to a cardiac arrest occurring in a private residence, provides directions to the person in need and reminds responders how to deliver hands-only chest compressions. Multiple responders may report to the scene. Civilian responders are granted immunity from civil liability in accordance with the Florida Statute Good Samaritan Act. The alert occurs simultaneously with the dispatch of local paramedics and firefighters.