In the summer of 1999, just before graduating from the University of Florida, Brad Gamble experienced first-hand the challenges of initiating outbound sales calls. Little did he realize that the experience he gained on the sales floor of Infinite Energy, which had been around only five years at the time, would be the spark in his eventual passion for the “art of selling.”

Fifteen years later, after progressive growth within the sales department, Brad left Infinite Energy as the VP of Sales and Marketing. By that time, the organization had reached $500 million in annual revenue. 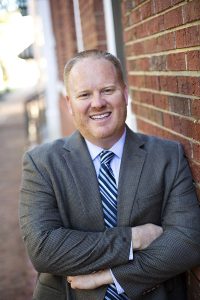 “As I began my consulting career, still working with an Infinite Energy company in Texas, that’s where I fell back in love with the idea of helping people with how to sell a product, how to articulate a message and how to simply communicate effectively with others,” said Gamble.

By early 2015 and back in Gainesville, he then became inspired by the downtown startup movement and the growth and excitement surrounding it. Gamble consulted with several startups, specifically ApexTek Labs, an engineering design firm providing help with prototypes, software development and various engineering projects.

Quite quickly, Gamble recognized a common theme. “It became evident that Gainesville had a serious void in its business support community. Places like Innovation Hub were terrific for the young engineer and start up entrepreneurs, but there was nowhere for people to learn how to sell. They couldn’t grow revenue organically,” said Gamble.

Gamble noticed that many startups would develop an idea or solution to a particular problem with a product or a service, and then look for another company to purchase that idea or product. He wanted to show startups that with training and guidance they could actually grow the business themselves. As revenue begins to come in, reinvestment can then occur and the business potential could grow further than they had ever imagined.

That’s where the birth of The Selling Factory came about. By early spring of 2016, The Selling Factory became Gainesville’s answer for effective sales training. Providing targeted training on challenges such as how to get through the gatekeeper, how to find a decision maker, how to communicate your passion and how to be a problem solver, The Selling Factory is helping a growing number of Gainesville startups go from selling nothing to actually seeing organic sales growth on their own.

By May of 2016, not only was The Selling Factory able to provide the tools for sales training, but it began to provide a location for that selling to occur and flourish at UF Hillel.

A learning and leadership resource for Jewish students of the University of Florida and Santa Fe College, UF Hillel is located at 2020 West University Avenue in Gainesville.

With the help of Rabbi Adam Grossman, The Selling Factory now has access to 5,000 square feet of open space on the second floor of the Hillel building.

“The environment is perfectly conducive to selling and growth. Here our clients are surrounded by like-minded individuals all actively pursuing targeted growth for their ideas or products,” says Gamble.

And it is here where the company’s “Blitz Days” occur. A Blitz Day is marketed as a one-day selling session gathering 10-20 startup CEOs, sales reps or interns focused specifically on outbound sales via the phone. Participants are required to show up with a cell phone, laptop and list of leads and then two hours is set on the clock. During these two-hour blitzes, Gamble is actively involved in listening to sales calls, refining sales scripts, helping participants reach the decision maker and identifying common concerns and how to overcome them quickly to reach the desired result – sales generation.

The Blitz Day benefits are paying off for Dycap Media Solutions, a local developer of software that automates cameras for businesses, schools and houses of worship using real-time image processing.

“The Selling Factory has most definitely made a positive impact on our company,” says Dycap CEO Armond Sepulveda.

“Selling is a challenge that you just have to get over, suck it up and make things happen, but having a coach like Bradley makes it so much easier. He was instrumental in the development of our outbound call script and provided real-time feedback during the sales call,” Sepulveda continued.

According to Gamble, it is this tightly focused attention that leads to sales success. “Selling’s greatest failure is multitasking. When you focus on something, like sales, you achieve greater results and greater creativity.”

And for the local startup community, that kind of targeted focus is leading quickly to a common response. Sold.